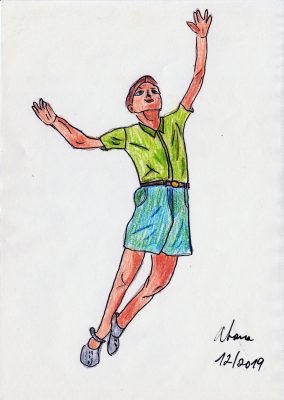 In the morning I woke up and wondered why Akela wouldn’t wake us with the guitar, that is, playing the guitar. Akela is our wolf leader in the Scout troop. I realized it after a while. I’m not on a party with a group, but on a tour with the choir, and today I will have my first concert with the guys. The choirmaster took us to the choir for about six months. To sneak around and get used to it. I know Goat is sticking his horns, but how do we do it when we don’t have one. When I talked to the guys about it, they explained it to me and they laughed a little that I didn’t know it. But that didn’t bother me. I will laugh at them again if something goes wrong. But, just a little bit, then I’ll help them. It’s bad if someone laughs and doesn’t help. Before we set out for breakfast in the school cafeteria, we changed into a stage dress, as they call it. I’d say we wore warm knee socks, dark blue shorts with a belt. With a belt because we are men and every man should wear a belt on his pants. That’s what Dad says, it’s apparently the right clothes. If we have to have a belt, we could even have long pants. But that is not possible, because we are still boys. When we leave elementary school and we are about fifteen, then we get long pants. It has been so since ancient years and it is a tradition. Of course I do not understand much, so I am a man on his belt and I am not a man on long pants, but just a boy. It’s kind of injustice.

My pants have a light green shirt and a white undershirt underneath. On the shirt we also wear a vest that has the color of pants. Well, shoes are shoes that we will wear separately. We will go to the exhibition hall in our normal shoes. But as I found out, one of my shoes disappeared. I don’t know where she went or where I tripped, so I’m looking for her when the others are leaving for breakfast. However, my best friends in the choir are also helping me to find me, we rearranged everything until we found her standing on a wall radiator. That’s a long distance, and Patrick noticed her. How I got there I do not know, but I was very happy and we all immediately ran for breakfast. Just overtook us in the queue girls.

But it didn’t matter, we could talk to them and ask them what they are called, where they are from, how long they sing and what they will do in the afternoon after the concerts and so on. The girls asked us almost the same thing. In the end, we took everyone a breakfast tray and said goodbye to the girls.

For breakfast there were buns with cheese, butter with salami and a cake with cocoa, apple and biscuit. It was just nice. I did not mind that I do not have buns with cheese, I was just hungry and so I ate all this and I was wondering if there was anything to add. But, it wasn’t. Just cocoa so I went to add it.

I almost got into trouble because I looked where the girls were sitting and hit a guy from the other church who was looking away from it, too. Fortunately, we both had empty mugs. So we laughed at it and went for cocoa together. Immediately we introduced himself, his name is Oliver and is about two years older.

So I think so. He asked me how long I had been singing, and for about half a year, Oliver said that he had been singing since he was nine years old and that he would like to study the conservatory once. So we talked and drank cocoa, and after a while the choirmaster waved at us that it was time to go. So he waved to our church.

Let’s try again. It is around eight o’clock in the morning and we have our first performance before ten. I say goodbye to my new friend Oliver, take the mug and tray where it belongs, and the boys do the same. We run from the dining room and look forward to seeing. What will it be like? And will we do? I asked myself and believed it would work.

My grandfather once told me that if I wanted something much, I should ask God in the name of Jesus Christ. I don’t understand it a bit, in the name, but sometimes I do. Especially before the exams and other examinations at school. Or knowing that I made some trouble and that can be a real problem. So my problem, which sometimes my dad solves spanking. But it’s not often. So three times a year, about.

From the gym we take jackets and bags with other needs, notes and lucky charms. Then we go through the city to the exhibition hall, where we are waiting for those who are here through the lights, sound and face makeup. I like it so much, my mother has to beautify herself in front of the mirror, but here it is a handy lady. Not that we really need it, we are boys and not girls. But, apparently, it is needed because of the light and photos and the cameras that will shoot us. We’ll probably be on TV.

We have been rehearsing for fifteen minutes, first how to come to the stage, how and where to stand, who and when will sing the solo and so on.

For me it’s new, so far I’ve only experienced some sorting in the music school, but here it is better. I’m not going to sing the solo yet, I don’t know either. Only the older guys will sing that.

Before the show we have half an hour to rest. We don’t have the power to romp or drink or talk loudly. Just relax and mentally prepare for the show. He said the choirmaster, he doesn’t know m what it means, but I guess I’ll do it just like the guys.

So I looked around and found nothing. I asked friends what he meant as a choirmaster and they laughed a little, then they explained it to me, just relax and maybe check the words of songs in the head and so on.

I was angry at myself for not finding such a simple thing. Now I guess I look like a little fool.

It was time for the show, we had the opportunity to go to the bathroom for the last time, so that we wouldn’t want to be on stage, the guys looked at me if I didn’t want to explain it, but we all laughed at it. Only those of us who knew about it. Others asked what we were laughing, and we told them that they were useless.

Then we sort and wait for the command to enter the stage as we practiced. I have a little bit of stage fright, that is a strange feeling, that’s the stage fright, you want to run, but you can’t or don’t want to. You feel that you won’t say anything.

That was people in the lobby, and everyone is looking at us. I looked at the other boys, who are here for the first time, and they are probably the same. Only the other haunted guys are fine.

While watching, I almost overlooked the choirmaster’s instruction and the beginning of the singing. I just forgot about the people in the hall and started singing the way we learned it. And it suddenly went well, not bad at all, the words of the songs and how to sing them, as if they were jumping out of my mouth, that is, my throat. The half hour of the first gig was just behind us, I didn’t even know how.

We bow to the people in the hall, people applaud and for the first time I feel such a joy that I have not had for a long time, perhaps from a good report card or from a won game at the camp, but even that is not the feeling. It’s something else, I can’t describe it.

When we are in the dressing room behind the scenes, behind the curtain, as it is called, we talk about it all with the boys. We newcomers mainly, and we all want to say everything at once, older boys also evaluate the performance and we all drink good lemonade but not much and we can eat some fruit. Until the next show we have time for about one excursion to a nearby factory for the production of machines for work in the forest, when the feast of Foresters.

I didn’t really enjoy the excursion, I was really looking forward to the next show. I’d like to ask the choirmaster how I did, but I’m ashamed and afraid he might not answer what I want to hear. So I’ll wait with the question.

On the way back to the exhibition hall, I stepped into a puddle full of slush, just suddenly she was there and I was there with one foot, right and cold ice water and dirty in my shoe. Good thing that I have spare knee socks, we must have it, and I still have dry shoes in the dressing room. Perhaps the winter boot will at least dry a little. Besides, nobody laughed at me, that was fine. Everyone wanted to help me, but it wasn’t possible in town.

The choirmaster took my shoe in the dressing room, stuffed it with a newspaper, and placed it on the wall against the wall. Where he got so many newspapers, I don’t know. I never saw them, and suddenly he had a lot of them.

And as for the first time, the same thing as before the first gig was repeated, the possibility to go to the bathroom for the last moment, sorting, and leaving the stage on the instruction of the organizer. People were already applauding and some were here for the second time. I guess we liked them a lot. Now I didn’t have much stage fright, and I was careful to instruct the choirmaster to start singing properly. It was five beautiful, I was able to enjoy singing individual songs. I told myself that I would do my best to be a better singer. So I liked it.