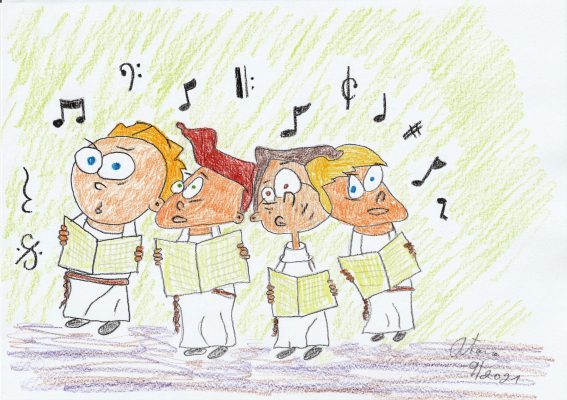 Even when we came to the cathedral, I didn’t have time to look, the cathedral in Autun is huge.
What to look at first? I like everything. And the stairs that lead to her.
And as I looked around and looked and walked up the stairs, I stepped badly and I was already on the ground, that is, on the stairs, and because I had my hands full and did not want to drop anything, I fell straight to my mouth, I also rubbed a little knee and it brought other scars. The boys didn’t laugh, they immediately helped me up. The nose and other essentials turned out well. I’ll probably have a bruise, but it will hide. I got a little dirty and the brush will do it again.
The choirmaster rebuked me that when I went up the stairs, I should look at them. In the end, however, he said that it could happen to anyone and that I should not cry. But I didn’t cry, not much, just a few tears. So I was a little ashamed.
Inside, the cathedral is even nicer, there is a lot of light is very high, I can hardly see the ceiling. Antonio suddenly took my hand and whispered to me that we would have plenty of time to look. I almost had to crash into a bench.
In the sacristy behind the presbytery, we have to have a cloakroom, the church still has it there.
We all talk and we are in a great mood, Louis is such a laugh and he likes to joke about everything and it’s nice. Now he shows me walking with my head bowed and looking up. It’s funny, the choirmaster laughed a little and immediately invited us to work. We learn what we’re going to sing, so we know it, but we have to say it.
We are going to try to enter the presbytery and how and where it will stand. It is clear, but sometimes it changes. This time I will be in the second row, as I have a red nose and a slightly abraded left cheek.
They say it’s still powdered.
We tried a few songs, always a bit. We also rehearsed going to the sacristy and there we tried to change into Alba, it’s not so cold in the cathedral again, so I take off my sweatshirt, and I would be hot in the album, even though it’s a light crumpled satin. We adjust and joke with each other, as always. And then again at the command of the choirmaster we go back to the presbytery in an orderly and quiet way. They always walk according to the order where, whoever is standing, I know that since I started going to church in our town. That’s so long ago. About a year or so. Before the rehearsal was over, the local priest served a small Mass for us so that we could do everything to grow into beauty and the right ambition. We prayed as usual, but I was silent, but I was not silent, I prayed in a low voice, as I and my family can. Directly to God in the name of Jesus Christ. The boys said hello to Maria and everything the priest wanted. It was nice, I liked it, but something told me it was wrong, that there was no ghost in it. I do not understand that. In a moment is the first part of the concert. The cathedral begins to fill with people, adults and children. Here’s the peculiarity, parents send children to the front rows to see as well as possible and most importantly to hear well.
We take turns looking from the door behind the curtain into the cathedral until we are driven away by the older boys. They say it’s not done. So we went back to our songs and everyone tried to concentrate as best they could and how used to it. Yannis and Simon were playing a clapping game together, playing quietly, just whispering, and probably having a lot of fun as they laughed. Then the choirmaster applauded, put his index finger in front of his mouth, and that means a great silence for all of us.
We have all remained thoughtful in our world.
Then it came, the priest ended a short service in the cathedral and we slowly, orderly went to the presbytery. We ascend to our seats and the people in the cathedral clap standing. They welcome us. I know that we will succeed in the concert again and I will like everything.
I guess I’m really starting to like singing.
Share