Siblings František and Zdenek enjoy the summer camp on a large meadow near the creek and with the daily sun in the sky as they can. They perform various tasks in their scout paths and today they will be shooting from the bow, the team decided to try the skill in which you must have three arrows in the air before the first one falls to the ground.
It is said to be very difficult and few can do it. They will see you today.
František asked for a party for the afternoon to leave for his party. Such leisure can be used anyway, but it is better to sport a bit and get some experience. Fanda, Akla was properly instructed what can and can not. Alone, in the manner of Akel, he summoned his Chamois and gave them a long speech. Almost long. Since every lesson is too long for the boys and sometimes unnecessary because they know everything and every adult can rely on them. They will not do anything, they will not break, they will not smoke, they will not touch and they are actually Angels. But when something goes wrong, it goes wrong. The fact that the cup dropped when I carried it, I can not.

„Boys,“ he began, with a hint of Fanda, and the guys from the party sat around him.
„So today we go to the big lower meadow and there we will shoot from the bow. Try to get three arrows at the same time. It is said that no one has ever been able to do it. “
„So I can do it.“ Kasal took the youngest Páťa and showed how he would shoot.
„You can do that,“ Vilda said.
„And I can do it!“ 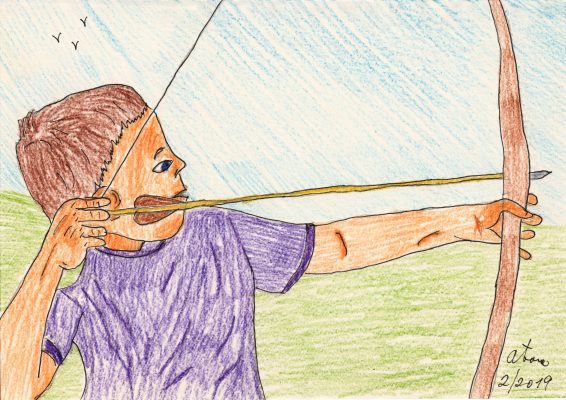 The timbers dressed appropriately in summer, the T-shirt, the shorts, the canvas, or the bosom, and set off with a tussle full of arrows, with a straw target, and with the bows on the lower meadow.
On the way, they started to sing such a boys song that is sung in each party. That it was fake, no one knew.
When they reached the meadow, it was a week after the harvest of the hay, the grass slowly grew slowly but allowed free movement. They could not even be said to have been trampled. At the bottom of it was the apiary, a few hives. There was no one there. It was a buzz and a major bang.
It was first decided where to build a target. It was a difficult decision.
Each of the boys had their opinion and wanted to push it.

„I’d like to go there to the woods.“
„Fools who will look for the arrows in the woods, we will put him in the middle of the meadow.“
„Sure, against the sun, I’d put it here and shoot it from the forest.“
„Here is a dense grass, it’s like shooting in a forest, we give it a piece from the edge of a forest and a piece from the edge from where we came.“

Questing ended the Fanda and placed the target just in the sun and just away from the forest and the high grass.
It’s all very awaited. Own shooting to target. Who fired, he was also repaired by Fanda, how to properly set up an arrow, how to hold his hands in sight, how to stand, and so on. Everybody got it. Who did not shoot, stood nearby, or sat in the grass watching the shooter and his interceptions in the target. Some have done well, others have not. But with every attempt the boys were more skilled and successful.
They also competed in archery. The winner was Radek, then Sasha and Zdeněk.
A few minutes before leaving the meadow, the boys attempted to shoot three arrows so that all three were in the air. It was not easy and no one was able to do it, only the best ones were able to fire the two arrows in the air before they landed.

„So it’s all for today.“ Frantisek snapped and everyone picked up the arrows, took a shot and set off back into the camp.

Everyone carried something, Zdeněk took a bow, and as soon as they entered the forest, he found good rods that he fired into the trees. Although he was warned by Fandou and the other boys, he always fired a thin twig again into the crowns. As it happens, the mischief is not unpunished. One such twig bounced off the trunk and fell back on Zdeněk, so she just knocked it a hand. In that moment, the Fanda was a little more angry with Zdeněk’s bow, and when Zdeněk reached the stream, Zdeněk wandered in the hands of the boys in the creek, but it was a bang. The stream was not big, but it had a big muddy swamp. Zdeněk was wet, dirty and surprised. The rest of the way had left room and wondered when he would wash the laundry. 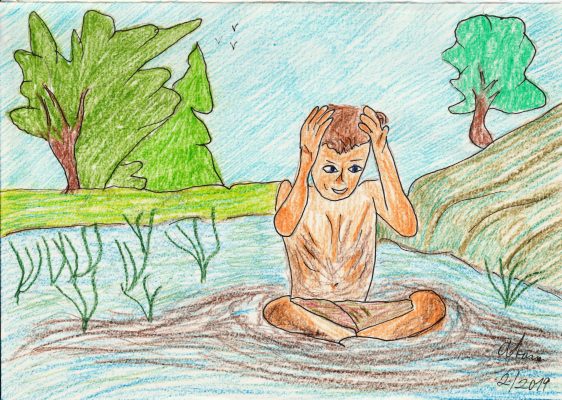